I've been having a fabulous time working on the fugues from the Diabelli variations by Beethoven. The fughetta is sweet and lovely. The big fugue is amazing!! It is a double fugue, meaning that there are two subjects at the same time. And just to keep things interesting, one subject is mostly repeated notes, while another subject is half steps. Seems like it would be impossible to make a fugue on that sound like anything but utter cacaphony.... and yet it's incredibly beautiful, vibrant, and full of lively partnerships between the two subjects.

And then it all hits a crisis point and a fermata and....

ANOTHER DOUBLE FUGUE! this one resembling the vivacious finale to the "Pastoral" Symphony no. 6 that we all know and love.

In sum: First half of big fugue

Second half of big fugue

Posted by Heather W. Reichgott at 8:50 PM No comments: 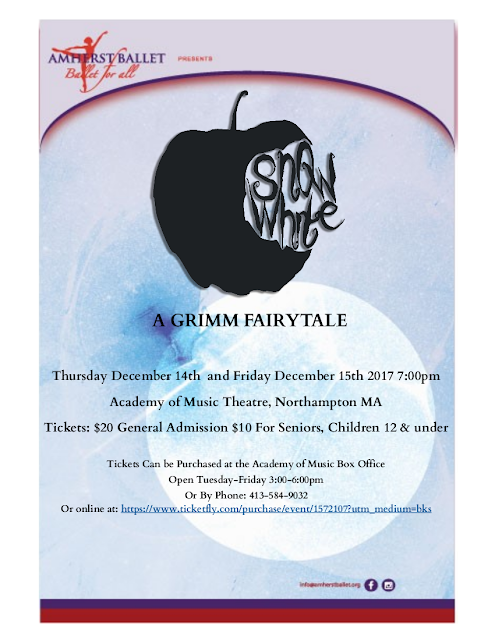 Come enjoy the classic Grimm (not Disney) story,
performed by the talented students of Amherst Ballet.
Live music provided by our piano trio: several movements from trios by Beethoven.

Posted by Heather W. Reichgott at 9:51 PM No comments:

Channel 22 news was at the Utuado benefit concert last night. Here’s their piece!


Posted by Heather W. Reichgott at 5:07 PM No comments:

Thanks to Andy D'Antonio, the Music for Missions team at Faith United Church, and their church member who is from Utuado and set up the partnership with them: we will be playing in this unique benefit concert Saturday night. Gillian and I are playing Mozart's beautiful sonata for violin and piano in E minor K. 304. Lots of great and varied music on the program. 7pm Saturday night 12/2 at the church (52 Sumner Ave, Springfield). 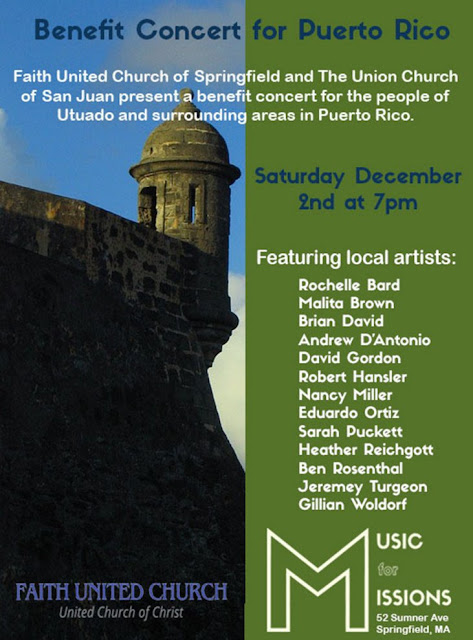 Posted by Heather W. Reichgott at 7:00 PM No comments: 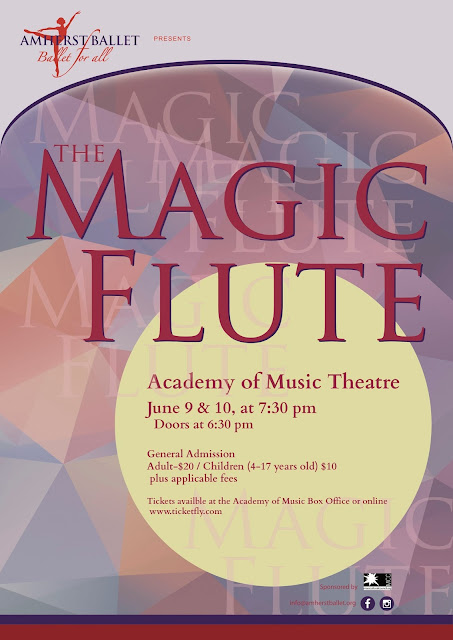 Posted by Heather W. Reichgott at 8:45 AM No comments:

Tomorrow morning I'll be playing music in honor of Mothers' Day, but a little differently. Many people have wonderful relationships with their mothers. (I'm glad to say that I do!) But for many, mother is not a loving and supportive figure in their lives. And many remember their mothers with sorrow because they are no longer with us. We also have others in our lives who love, support and mentor us, like surrogate parents, or more distant forebears that we'd like to emulate.

The Scripture for the day is about one of these: Stephen, the first Christian martyr. When we know we must speak the truth no matter what the consequences may be, Stephen is our hero.

Mozart's sonata in A minor K. 310 was written the summer he took care of his dying mother. The whole work is a balance between anguish and peace. I'm playing the middle movement, which is very peaceful, except for a sudden lament that breaks out in the middle, somewhat resembling the Dies Irae (Day of Judgment) that Mozart would later include in his Requiem.

Ravel's Menuet on the name of Haydn is in honor of that compositional ancestor. Ravel went to great lengths to note-spell Haydn's name in the theme. Musical notes go A through G. In German, B is actually B-flat and our B is called H, while E flat is called S, so names like Bach and DSCH (Shostakovich's initials) can be had without much trouble. For Y and N, Ravel had to keep counting up the scale until he reached that point in the alphabet. His Y is actually another D. The piece is tender, just a little like a classical minuet, and as carefully crafted as one would expect from an imagination that works that way.

And at the end of the service will be a piece by Leonard Bernstein in honor of his childhood piano teacher and lifelong friend, Helen Coates. This is no sweet Hallmark motherly figure, at least not according to the music, rich in loud exclamations, bright rhythms and a little repeated figure that sounds suspiciously like a donkey's hee-haw. We should all be so lucky as to know a mentor like that.

Looking forward to sharing this music with folks, mothers and otherwise, tomorrow!
Posted by Heather W. Reichgott at 3:58 PM No comments:

Just wanted to share the poster for these concerts.
I'm very excited and humbled to play in the beautiful Symphony of Psalms by Stravinsky.
Hope you can make it!
Saturday May 6 at Grace Episcopal Church in Amherst MA, 7:30pm
Sunday May 7 at Edwards Church in Northampton MA, 4:00pm

Posted by Heather W. Reichgott at 5:25 PM No comments: